I was pleased to be joined by business leaders from across the economy in Denver today to discuss one of our nation’s most important issues: improving our infrastructure permitting process through modernization of National Environmental Policy Act (NEPA) regulations.

For the last three years, the U.S. Chamber of Commerce has been leading the charge in support of a comprehensive infrastructure bill. While we have been actively engaged with the White House and Congressional leaders on an infrastructure bill, reforming our outdated permitting process is just as essential.  As U.S. Chamber CEO Tom Donohue has said repeatedly: “It shouldn’t take longer to approve a project than to build it…You can line up all the cash you need, but if the permitting process is slow or broken—there’s no point in doing an infrastructure deal. And any proposal that fails to reform the permitting system won’t have the Chamber’s support.”

Following an extensive input process, the Trump Administration has answered this call by proposing reforms to the NEPA Regulatory Process. To support these changes, the Chamber has assembled the Unlock American Investment Coalition, comprising over 40 business groups representing nearly every sector of the economy. We come at this problem from many different angles, but collectively we agree that modernizing NEPA will help reduce the delays associated with critically needed infrastructure in Colorado, while also bringing crucial environmental and economic benefits to the state.

Last modified in 1978, permits and other federal approvals under NEPA have languished due to increasing bureaucratic processes and nonstop litigation. NEPA has become unacceptably burdensome, delaying infrastructure projects that would benefit Coloradans every single day with faster commutes, reduced vehicle maintenance due to upgraded roadways, and more efficient delivery of goods and services. In addition, a modern, efficient highway system would deliver environmental benefits with reduced emissions associated with less idling in congestion and more infrastructure resiliency.

The proposal from the White House Council on Environmental Quality (CEQ) is currently in a public comment process, which includes tomorrow’s hearing in Denver. In advance of that hearing, I was joined today by representatives from the Colorado Springs Chamber of Commerce, Grand Junction Chamber of Commerce, Colorado Farm Bureau, Public Lands Council and National Cattlemen’s Beef Association, the Consumer Energy Alliance, and the American Road and Transportation Builders Association to discuss the impact that NEPA delays have had on Colorado and the opportunities that modernization will bring to improve the state’s infrastructure. 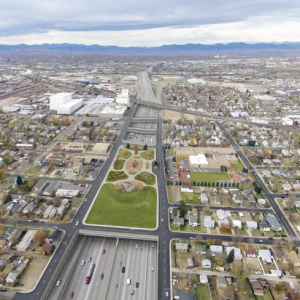 For instance, the I-70 expansion project in Colorado has been delayed more than 13 years. The 10-mile stretch of road to be upgraded is home to 1,200 businesses and carries up to 200,000 vehicles per day connecting Denver International Airport to the surrounding region. The $1.2 billion project will not only provide immediate construction jobs, but also will improve public safety with a widened shoulder, reduce congestion to cut down on delivery delays, and feature a four-acre park to connect communities separated by a viaduct built in the 1960s.

And it isn’t just roads. Projects to provide reliable water supplies like the Northern Integrated Supply Project in Northern Colorado and to improve forest habitat like the Upper Frying Pan Vegetation Management Project have seen NEPA-related delays and will benefit from a streamlined NEPA process.

Further, delays caused by current NEPA regulations hinder the development of emissions-reducing renewable energy projects and mass-transit. With many projects being delayed for years, these environmental benefits are going unrealized because of inefficient NEPA procedures. As the widely respected Bipartisan Policy Center has written, “Everyone that appreciates the essential steps that must be taken to transition to a low carbon economy should champion any effort to review NEPA regulations and seek to make the process work better.”